I grew up with big dogs, a German Shepard and later a Labrador Retriever, but one of my grandparents had a smaller dog, a dachshund or a wiener dog which is a bit easier to spell when I remember that “i” before “e” rule. I liked the dog okay and even tolerated its annoying habits until the day I learned it had been sent to earth by Satan just to get me in trouble.

The dog, I have blocked out its name and gender from my memory, was light reddish brown, a hair color I acquired myself once from a bottle, with the typical wiener dog characteristics of a long body, stubby legs and a long nose. I remember it being rather lean compared to some of the others of the breed I had seen. The shape of this creature fascinated me. How these 4 stubby legs managed to keep the long body off the ground, barely off the ground but still not dragging its belly on the sidewalk, perplexed me.

The dog loved to eat its own poop. I thought poop eating was gross but my grandparents were not particularly bothered by the habit and ignored it; maybe they thought the poop recycling effort saved on cleanup. I was barely 6 so my only way to live with the situation was to not let the dog lick me and keep my distance from its icky, poop-eating mouth.

The dog also liked to bark. A lot. It was more of a yapping than a bark and it was constant and it was loud. There would be a superficial effort toward getting the dog to stop barking from one of my grandparents but then they would quickly give up and just let the dog go at it until he grew bored. This did not seem like the proper way to handle the annoying habit, but I was 6 and it was not my dog so I tried hard to tune it out.

Every day after school, I headed to my grandparent’s house to be fed and watered until my mother picked me up after work. Nothing helped me unwind more after stressful interactions with fellow students, than enjoying a snack and chilling in front of the television catching up with my favorite sixties sitcom, “Petticoat Junction”.

“Petticoat Junction” was my obsession; specifically Betty Jo Bradley was my obsession. I wanted her hair, her dresses and her dog that did cool tricks and could beat Uncle Joe at checkers. I wanted to be better than all the boys at baseball and then go to the dance with one at night. I wanted to wear a cute hat, get grease on my nose and drive the Cannonball with Floyd and Charlie. I even went so far as to start signing my name as Betty Jo in school but sadly that never caught on with the teachers.

No one could tear me away from “Petticoat Junction” when it was on TV in the afternoon. No one until that evil dog decided to ruin my life.

One day after a particularly stressful afternoon of reading and writing, I hurried home for my usual routine. I settled in front of the TV just past the “you are going to go blind” boundary my grandmother always imposed and began munching on my snack. Normally, the dog was outside during this time but today he was sitting right next to me expecting me to share. I tried to ignore him, after all I was not eating poop so I was not sure why he was interested, but the dog began to beg.

Begging turned to yelping and then to barking. It became louder and louder. I was getting frustrated. The dog was ruining my chill routine, my favorite show was about to start and my grandmother was just ignoring the entire situation. I told the dog to be quite, I pushed him a way and I hurriedly finished my snack. Even without the presence of food, the dog would not shut up.

The theme song began, inviting me to “come ride the little train that is rolling down the tracks to the Junction, Petticoat Junction” and the dog was still barking and the grandmother was still ignoring. I was in a near panic; Betty Jo was going to be on TV any moment and I couldn’t hear!! I had to take matters into my own hands…err mouth.

That was my solution. Screaming louder than the dog was barking and telling it to shut its fucking mouth. It worked. The dog stopped. I was the first one with the balls to put this creature in its place. It is possible the dog stopped because it saw my enraged grandmother running in from the kitchen but I will never know for sure. There was silence and for the briefest of seconds I was feeling quite pleased with myself until I felt a tugging on my arms, a tugging so forceful I was up on my feet and turning uncontrollably away from the TV.

I was confused, not sure what was going on. Words were coming out of my grandmother’s mouth but I was still trying to get a view of the TV show around her plaid housecoat. Next thing I knew I was in the bathroom and forcefully sat on the edge of the bathtub. She was lecturing me a bit and I just kept my head down hoping she would be done soon so I would not miss too much of my show. I finally looked up and she grabbed both of my cheeks quite hard and shoved a moist bar of soap in my mouth.

I was stunned. I had never heard of such a torturous tactic let alone had to taste a manly bar of soap before. It was gross and I did my best to not swallow but with my mouth cranked so wide open that was impossible. She lectured me some more and told me to sit there and think about what I had done.

I thought plenty. I was missing my show. I wanted the soap out of my mouth. I thought a few choice words aimed at her direction. I thought about how she can’t hear her annoying dog but somehow one tiny “fuck” and she has super hearing powers. I considered maybe I had used the offensive word incorrectly and that was my crime. I wondered how long I was going to have to sit on this cast iron tub and try not to swallow soap tinged spit. Mostly, I plotted revenge on that damn dog. If anyone deserved to be sucking on soap it was the dog that ate poop.

The evil yappy, spawn of Satan was now quiet and acting all innocent. It sat nicely outside the bathroom and stared at me wagging its tail. It would come just close enough to me so I could not reach it and then prance off gleefully. I swear it’s ears transformed into horns and it’s tail into a pitchfork at one point. Everything that dog did seemed to taunt me and I was convinced it planned the entire incident knowing both my parents and my punishers children all swore non-stop giving no regard to my sensitive ears and impressionable mouth. Evil, evil dog set me up! 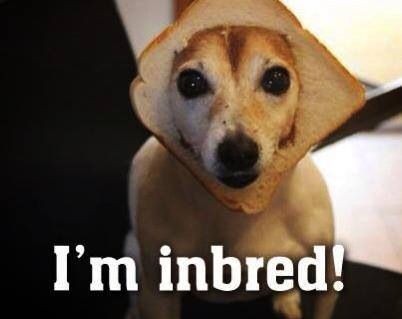 At some point my mother finally arrived to collect me. I am not sure how many hours it was or if it was actually days but it seemed like an eternity. I did not know what to expect. Would I be sucking on this soap in the car and for the rest of the evening? Would a new punishment be devised? No punishment could be worse than what had already occurred, I had missed my show and was being taunted by Satan’s dog. I began practicing my pleas for mercy.

To my surprise, my mother did not come flying into my prison bathroom to scold me. Instead, I heard her and her mother-in-law go at it. Accusations were flying over where I could have heard such language. Where didn’t I hear it? My grandmother accused my mom, my mom accused all of my grandmother’s sons. Stern warnings were issued by both women over what punishments were allowable and what would happen if I misbehaved again. Meanwhile, my mouth was sore from the giant bar of soap and my butt was sore from the tub and the dog was still taunting me.

Finally the argument ceased and my mother rescued me from soap jail and the dog. We drove home and discussed the concept of “grownup words” at length and I deduced swearing was best when not done in front of old relatives. Nothing more was mentioned of the incident. I am pretty sure both my parents laughed, probably commended me on my proper form, and felt a bit guilty for my inadvertent profanity lessons.

Upon returning to my grandparent’s house there were new rules about snacks and TV time and my favorite chill ritual was no more. I was devastated. I could no longer enjoy “Uncle Joe he’s a movin’ kinda slow at the Junction, Petticoat Junction” and it was that evil dog’s fault. It was totally unfair that only I was punished and that the precious dog did not even get a mild reprimand when it caused the entire fiasco. I wanted justice. I wanted revenge.

But, I never got my revenge. Eventually I was able to watch my favorite show again but missed Betty Jo and Steve’s entire courtship and wedding. The dog of course continued to eat poop and bark. We rarely interacted.

I love all animals, both real and imagined, but to this day when I see a wiener dog I get nervous certain some nefarious plan is about to unfold and I taste a faint hint of soap as I stare into their cold black eyes with an unspoken warning not mess with me again. The dogs stare back blankly, barely showing any understanding but I know they know and I will forever be on guard.

I am a woman of many moods and each one has her own soundtrack. View all posts by InteractThis